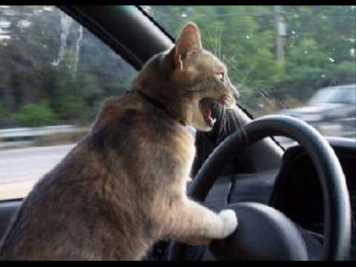 Native New Yorkers view the world through the grimy lens of cynicism.  Expecting and preparing for the worst possible result from all people and situations seems to us the most sensible way to travel through this life.  And travel we do – on buses, in taxis, on ferries, and through subway tunnels, all within close proximity to our fellow citizens.  Because of these myriad public transportation options, most of us don’t have a personal relationship with the internal combustion engine; after all, if God had intended for New Yorkers to drive, He wouldn’t have provided Alfred Ely Beach the idea for an underground pneumatic railroad back in 1869.

And the subway works just fine, thank you.  More or less, anyway.  Okay, it’s sweltering in the summer, stifling in the winter, and crowded all the time, but, it’s so much easier than taxis or buses.  Relatively few things can go wrong.  It runs on tracks from point A to point B; it can be fast or slow or stuck in a tunnel, but it will never deviate from its path leaving you stranded in a strange neighborhood.  And for those occasions requiring personal transportation there’s an Avis Car Rental garage on East 43rd Street.

My grandfather owned a car in the city which he used for both his business and to drive upstate for weekends; my father had one, too.  Although I had learned to drive, I rarely saw the need to actually do so.  I had always commuted to school and work in the more traditional fashion – strolling to the subway stop, passing the firehouse, chatting with the firemen and petting the dog, picking up a newspaper and coffee, and observing the theatre of the city’s streets along the way.

Like most New Yorkers, I’ve seen pretty much everything life has to offer on those walks – from the homeless man lying on a dirty plaid sofa watching tv under the Queensboro Bridge to the bride in full white wedding regalia boarding the B train. I’ve seen it with my own eyes, I’ve seen it often, and right now it’s blocking the entrance to the building where I need to go, dammit.  And no one in New York has seen more than its police officers.

In the early years of our relationship, my husband Jamie’s office was in Brooklyn Heights and we lived on the Upper West Side, just a few blocks from Engine Company 76.  Jamie’s was an inconvenient and time-consuming commute so Louis, his boss, thought a company car was in order: that’s how a blue Mercedes C class entered our family immediately enroll ing us in that subset of city dwellers whose lives are governed by the New York City Department of Transportation Alternate Side Parking calendar, downloadable in various languages including Chinese, Russian, and Haitian Creole.  (Believe me; woe of apocalyptic proportions betides the ignorant fool who leaves his car on the wrong side of the street when a Department of Sanitation street sweeper is due.)  Months passed with Jamie driving to work and my hopping on the train, each of us pleased with the arrangement. Then came the summer Saturday that we were invited to dinner with friends in Chappaqua, out of the city, one of those occasions that the car was supposed to make easier.

Around noon, Jamie wandered into the living room where I was watching a film I’d recorded.  I pushed the pause button  when he began to talk. “I have to go to meet Stu at Hudson Street at 3 o’clock so why don’t we get ready early, I’ll go to the meeting then call you when we’re through and you can meet me and we’ll head to the Damiano’s.”

I considered the suggestion, then shrugged, unimpressed with the idea. “What’ll I do while you’re with Stu?”

I wrinkled my nose. “No, I don’t want to do that. It’s a schlep from Hudson to any stores I like and I was going to wear the blue suit with high heels tonight and I hate walking around outside in nice shoes.”

“Yeah, and park at Hudson Street and I’ll still have to walk all the way over to West Broadway.  No, thanks.”

“No, you take the car, park on Broadway and I’ll walk over and meet you when Stu and I’re done.”

Exhale.  “Yeah, I know I know how but I don’t parallel park real well.”

He was using that tone, that ‘What’s wrong? Can’t rise to the challenge?’ tone that I hate but remain unable to resist.

By 2:45 pm we were downtown.  Jamie exited the car in front of his friend’s mid-block office building and I slid behind the wheel.  Before slamming the door he leaned in and said, “I’ll call you when I’m through and you can tell me where you are and I’ll come find you.  Then we’ll drive to the Damiano’s.”

“Nope, you never get a court date the same day as the offense.” Grinning, he slammed the door and strolled away.

Using my walker’s geography I tried to figure out how to pilot this monstrous vehicle back toward Broadway.  I knew that avenues run north to south and streets are east to west but I am an Upper West Side baby; except for attending NYU, I had little experience with southern Manhattan and even for that I exited the subway at West Fourth Street and walked.  I knew that Hudson Street met West Broadway somewhere around Chambers Street and that it runs both north and south so I could find the stores I wanted easily enough, providing I could get to that point.  The problem was that all of this was in the direction opposite of where I was headed and I didn’t have the vaguest idea how to get back to where I wanted to be.

Guided only by rudimentary New Yorker’s geography – east are the beaches of Long Island and west is New Jersey and everywhere else until you reach Los Angeles – I nosed into the thick Saturday afternoon traffic, slowly, nervously, inching what I hoped was eastward.  So many people, so many cars, so many trucks, so many One Way signs sprang before me that in no time I was completely discombobulated.  I don’t know what I did wrong but  I found myself crushed in the middle of the New Jersey-bound Canal Street traffic jam crawling toward the open, leering mouth of the Holland Tunnel.  Damn Jamie and his bright ideas.

Even the thought  of the tunnel panicked me.  Obviously it began in lower Manhattan but I had no idea where it ended.  My mind conjured images of Lucy Ricardo’s first driving lesson when, panicked, she attempted a three-point turn in the tunnel and reportedly stopped traffic all the way to East Orange, New Jersey.  Determined not to befall the same fate, I looked nervously for someplace, anyplace, to turn out of the stream.  It wasn’t going to be easy; all of the streets seemed to be one way, feeding into the four lane bottleneck approach to the double-tube tunnel. My palms grew sweatier with each street I passed.  About a block before the actual entrance I noticed another one-way sign pointing toward Canal Street but the street itself was blocked by blue NYPD sawhorses.  Rejoicing, I switched on my right turn signal and began the laborious process of exiting to the right.  I swerved around the sawhorse and saw three New York City police officers standing by identical sawhorses at the opposite end of the street; they were waving away all traffic attempting to turn into the street.  Hearing my approaching engine, one broke from the cluster and sauntered toward my car.  He gestured for me to stop, so I did; I lowered the window and waited expectantly, hopefully.

“Yes, but I’m lost.  I was getting forced into the tunnel traffic and I didn’t mean to go there. I don’t want to go into the tunnel.  I don’t even know where it goes.  I was trying to get over to the left to go to West Broadway but nobody would let me over.  So I turned here to go around the block and try another way.” I smiled.

His eyes narrowed slightly.  “Lady, this is a one-way street. You’re going the wrong way.”

“Yes, I know.” Hadn’t I just explained that?

He flexed his jaw.  “You’re going the wrong way on a one-way street. You have to turn around and go back”

“No, I can’t go that way. I’ll get pushed into the tunnel.” My hope was fading.

“Look, lady, either you turn around or I am going to write you a ticket for driving the wrong way on a one-way street. Now turn around.”

“No, I’ll get pushed into the tunnel.  If you have to write the ticket, then write it but  I can’t go back that way. Nobody will let me over and I’ll end up somewhere in New Jersey, I don’t even know where.” At this point all hope was gone and panic was creeping into my voice, not for the ticket, but for the possibility of getting lost in New Jersey.

He pushed his cap further back on his head as he stared at me staring at him.  He sighed. “Lady, what do you want me to do, stop the traffic for you?”

His eyes widened.  My choosing to take his sarcasm seriously meant he was now stuck, as stuck as I was.  He sighed again.  “All right.  Turn around and follow me.”

I executed my three-point turn successfully and followed him up the sight grade.  He stepped into the first lane of traffic and held up his right palm toward it while gesturing for me to follow with his left.  He repeated the process through the lanes until all approaching cars had stopped; I followed behind him an inch at a time like a tentative but obedient dog.   After I had cut diagonally across the stopped  traffic I braked near the officer.  He lifted his left arm and pointed theatrically in the direction I needed to go, then swept his right arm across his chest, brushing past his face, then dropped his head in a dramatic courtier’s bow.  I yelled ‘thank you’ through the closed window and accelerated slightly.  As I passed him I could see the grin on his face.

Yes, we’ve seen it all here in New York.  And there are reasons why many of us choose not to drive.