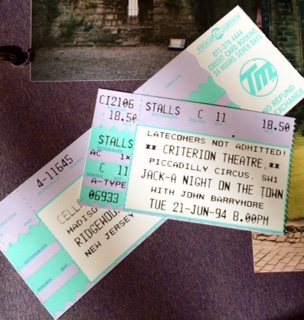 I arrived at the Criterion Theatre in Piccadilly Circus a little early due to the habit of a lifetime. (To my father, on-time was late). I chatted to some of the other audience members. Actually, there were so few, I think I chatted to all of them until the lights dimmed.

Nicol Williamson bounded onto the stage in a roaring Barrymorian vocal flurry, like a pot verbally boiling over in fury and shame at being fired from the film A Star is Born. He stalked the stage, trench coat tossed elegantly over his shoulders, then stopped suddenly upstage left and poured himself a drink. Crystal glass in hand, he prowled downstage to tell us, the audience, of his travails on Broadway, in Hollywood, while married. In all of these scenes, Williamson’s acting was pitch perfect, embodying Barrymore’s admirable and less admirable qualities with a wry and witty tone. The time flew by. When the curtain came down I clapped as wildly as everyone else in the theatre. After taking his curtain call, Mr. Williamson motioned for the applause to die down, for everyone to sit, and then, breaking character, he began to talk about the play. He talked about his lifelong affection and admiration for Barrymore, both personally and professionally. He mentioned what it is like to be considered a difficult actor to work with, something he knew from personal experience, he confided to audience laughter. He talked about how this performance was a risk for him, an experiment, but one near to his heart. He thanked all of us for coming and then, suddenly he invited every person sitting there to join him for a drink as a way of thanking us for believing in him and his dream. He said that he would meet us in the bar of the Criterion restaurant next door within thirty minutes, then he swept from the stage.

Most of the audience members stared at one another.

“So do you think he is serious?” asked a woman seated three or four rows behind me with her husband.

“But will you go?” asked a man’s voice in front of me.

I thought. “Sure, why not? The worst that will happen is that he is either kidding or will change his mind and I will have to pay for my own drink.”

My fellow audience members murmured to one another, agreeing with me and wondering whether the effort was worth the reward.

I stood and picked up my Armani linen jacket from the seat back. “Well, I am going. I have nowhere to go and nothing to lose.”

“Laura.”  We shook hands and grinned at one another.

We exited the auditorium and scuttled through the crowd to the lovely and elegant bar area of the high-ceilinged Criterion restaurant. Rory and I chose two of the red chairs arranged in cloverleaves around small wooden tables and ordered. He got a beer and I ordered a sparkling water. We chatted a few minutes about our homes and families, and then some of the other audience members began to trickle in, chattering about the show and the bizarre invitation by the star. We joined their discussion. It was odd; I grew up in New York City but had never heard of a Broadway star inviting a theatreful of people for a thank you drink for enjoying his show.   The incongruity of the circumstances and the proximity of alcohol soon turned disparate theatergoers into a raucous assemblage of friends.

Within forty minutes or so, Nicol Williamson entered and the real party began. I don’t know whether he was drunk or just having a good time now that his night’s performance was over, but he was funny and charming, much as I imagined John Barrymore must have been. He asked me where I got my accent and how long I would be in London. When I said that I was on my way to study at Oxford, he began to recite lines from Hamlet with such passion and power that I developed goose bumps.

Then, almost in a puff of smoke, he stopped, stood, and was on his way to work the room, to sit at the next table, to thank those people for coming.

Rory and I chatted for a few more minutes then I began to yawn. He offered to walk me the few blocks to The Dukes. On the way we chatted abut how truth is stranger than fiction and how none of our friends would ever believe that this had happened.

We reached the gas-lit cul-de-sac of St. James’s and the liveried doorman opened the heavy glass door. Rory said goodnight, kissed me on the cheek, turned, and whistling, disappeared into the summer night.

One thought on “A Night on the Town with Jack, Nicol, and Rory”