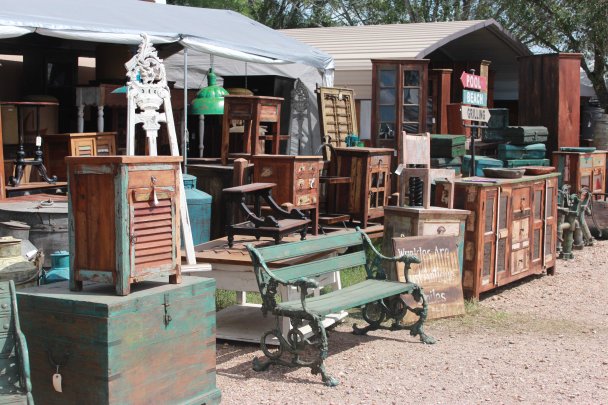 A few years ago Jamie and I drove up to Maine for a long weekend with friends, Julie and Eric Cook. We would be staying at Eric’s family’s summer home on the water and Eric and Jamie would go fishing while Julie and I wandered through an antiques fair. We had driven up in two cars because Julie was sure that she would find so many terrific things at the fair that she would need both the trunk and back seat of their BMW 740iL to contain them all.

I think her certainty caused Eric to quake in fear; it certainly gave Jamie pause, as he hoped that her acquisitiveness would not influence me since, left to my own devices, I am already a world-class shopper.

Early on Saturday morning, as we drank coffee in preparation to depart Eric looked nervous.

“Jules,” he said for about the eighth time. “We only have the one car. The trunk is full and I don’t want stuff damaging the leather on the back seat. Don’t buy anything too big.”

Julie crunched her toast and stared at him. “Jamie and Laura have a car, too. They can help us if I find great furniture.”

Jamie almost choked on his juice. He wiped his mouth and turned to me. “Furniture?” he hissed.

I shrugged. “I’m not buying furniture,” I whispered back. “I just came along for the ride.”

Eric refilled his coffee mug and turned to face Julie who was loading her mug and plate into the dishwasher. “Jules, our house is full. We don’t need any more furniture.”

Julie exhaled and looked at him directly. “Eric, you know perfectly well that we aren’t staying in that little house forever. At some point we will have children and we will need a bigger house; a bigger house requires more furniture and it is just cost effective to buy what you need when you see it rather than trying to furnish an entire house at once. And you also know that I have been looking for a jelly cabinet and a linen press for years.”

I had the feeling that this discussion had been going on for at least as many years as she had been shopping so I excused myself to get my purse and shoes. After loading our dishes into the washer I dragged Jamie with me out of the kitchen and up the back staircase to our guest room.

“We don’t need furniture,” Jamie announced as his foot hit the first step.

“I am not going to buy furniture,” I retorted grumpily pushing him up the stairs in front of me. “Geez, I have already said it.”

“You know what Julie is like. She sees stuff and she doesn’t consider the price or where it’s going to go. She never even seems to know how big things are. That’s how they got that massive four-poster bed that fills the entire guest room of their house.”

“That’s also how we got that massive Bajan mahogany bed that fills our guest room,” I reminded him, “only you chose that. And that required a custom mattress, as well.”

I sighed. “I know, James.” I slid on my Keds and grabbed my tote bag and left him in the bedroom.

Julie drove their car to the antiques fair. I sat in front bearing the brunt of her foul mood while Eric’s mother napped in the back. By the time we reached the fairgrounds, Julie had pretty much vented all of her aggravation and was considerably cheerier as we paid our parking fee and began to stroll through the acres of goodies.

We wandered for hours, but Julie was unable to find a jelly cabinet or a linen press that met her exacting standards, although she bought an entire set of beautiful sterling silver flatware in the lily-of-the-valley pattern. I bought a couple of antique pub bottles and a Victorian basket cat carrier for Tuxedo. Eric’s mother bought nothing.

At about 4 pm we reentered the hot car for the hour’s drive home. Despite not finding her heart’s desire in any of the furniture stalls, Julie was thrilled with her silver purchase. As we approached a red light in a congested intersection with a gas station or convenience store on every corner, Julie suddenly grabbed my arm. “Look!” she exclaimed, pointing in front of us.

It was a gas station that also had a U-Haul rental office. Parked in the lot was a rather large truck with a sign on it that read “Rent Me for $19.99!”

“You’re not!” I exclaimed understanding immediately.

“Oh, yes, I am,” she replied flicking her hand across the turn signal switch. “It’ll give Eric a heart attack when he sees us drive up in that. He deserves it. Jamie, too.”

“But what about your car?” I asked.

And that is what we did. Julie rented the truck and she and I rode home in it, bumping up the long, rutted, gravel driveway to the house. We could see Eric, Jamie, and Eric’s father sitting on the wide front porch, enjoying a beer in the waning light as they awaited our return. When we got close enough, we could also see their eyebrows shoot straight up and their mouths all fall open as they realized who was in the truck.

Julie parked haphazardly and we both hopped out. Eric’s usually tanned face was the color of oatmeal.

“What have you done?” he shouted as he stumbled down the porch steps.

“What do you mean?” Julie asked, blue eyes opened wide. “You said the trunk was full and you didn’t want our purchases to damage the back seat. How else are we going to get our stuff home?”

Hyperventilating, Eric pushed frantically at the heavy latch holding closed the back door of the truck. As he caught his breath, I could see Jamie and Mr. Cook walking slowly toward us. Their pace quickened as Eric exhaled, “Oh, my God!”  Reachng the truck, they both peered in slowly, as though frightened at what they would see.

The vast truck bed was empty. Julie and I started to laugh as Eric nearly collapsed onto the grass.

It was the last time either Eric or Jamie told either of us what to buy.