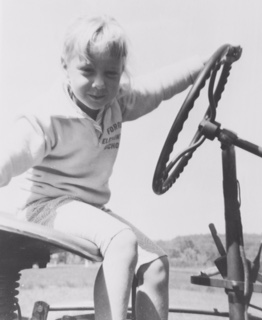 There is a tractor in our garage. It lives there. It is a 1946 FarmAll Cub and it belonged to my grandfather.

Those of you who know me are aware that my family life began in an apartment in the Bronx, so you may wonder why I have a tractor, or even why my grandfather had one.

When my dad was about fifteen years old, my grandparents bought a couple of acres upstate; even though my grandfather had no intention of farming per se, he held the concept of it in a warm and secret place in his heart, and his first purchase was a brand new, shiny, red tractor in silent homage to the source of that secret place.

When my grandfather was a child, his beloved mother died giving birth to twins (who also died); in his grief and – to hear my grandfather tell it – drunken incompetence, my great-grandfather couldn’t handle the older children and all but gave them away to virtual strangers to foster them. My grandfather ended up with the Van Dykes, a farm family in the Bronx, in the halcyon days when the Bronx was acre after acre of meadows and dairy farms, before concrete and city housing swallowed up the land. The family was so kind to my grandfather and he loved them and their way of life so much that even though he was a city child, he resolved to recreate that bucolic time in his later life, albeit on a far smaller scale. (I understand that completely because I did exactly the same thing when Jamie and I were looking to buy a house. I chose a brownstone Dutch colonial with two acres, fruit trees, chicken and turkey coops, and a grape arbor. My grandfather’s tractor, which had until then been living with my parents, came to live in our garage.) So he bought the land and the tractor and, as he never really farmed, the tractor never really worked. It was more my grandfather’s friend and companion than an actual tool and he spent hours tinkering with it out in the tractor house (no, not a garage – my grandfather built his best friend its own little wooden structure where no car or motorized vehicle dared show its headlights).

Admittedly, I don’t drive the tractor a lot, especially after three knee surgeries. I mostly turn it over every once in a while to be certain that it still runs. And I keep a trickler on the temperamental battery to keep it from dying. Besides, Tractor doesn’t really want me to drive it. Although while my grandfather lived it let all of us – children and grandchildren – drive it, Tractor only really liked my grandfather. Where the running noise with my grandfather was a throaty, rumbly, purr, the noise it makes for the rest of us is a groan, followed by a series of higher-pitched mechanical whines. I understand. Tractor misses my grandfather as much as I do and the only way it can show its unhappiness and discontent is by flooding the engine when I am attempting a three-point turn in the middle of a main county road.

Although, now that I think of it, Tractor has always had a way of expressing its displeasure, if anyone else dared drive it when my grandfather wasn’t around. My grandfather had purchased a little umbrella attachment to shield himself from the summer sun while he mowed or pulled all of the neighborhood kids in a big, red, wooden, wagon that he built. Once when my mom drove Tractor while my grandparents were still in the city, she forgot to pull down the umbrella as she swung into the tractor house snapping off the top. I was only about three year old but I could have sworn that I heard Tractor chuckle in delight at my mother’s misfortune.

But I love Tractor even though it is cranky and uncooperative. After all, it is seventy years old and entitled to enjoy its retirement. Mostly, though, it is a tangible piece of my grandfather that I still have with me forty years after his death.