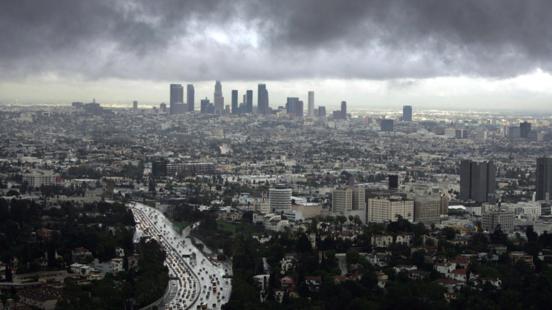 There are reasons why I never wanted to drive in California.

The first was because Los Angeles is sprawling and covered with roads swirling in random directions. New York is so much easier – north is up and south is down, east is Long Island and west is New Jersey, and eventually, the rest of the country. Then there are the 12-lane freeways, which terrify me, and the neighborhood streets (called ‘surface streets’ by native Angelenos, to my eternal bewilderment), which frightened me only slightly less. And finally, there was Jamie’s car, an extremely expensive, little, foreign, champagne-colored convertible that went from zero to sixty in a second and a half. Sitting in the bucket seats was like looking at the control panel of the Starship Enterprise from a hole in the ground; it was filled with anonymous buttons and knobs and lights, but nothing I could identify as useful, like an ignition or window control. As I possessed no advanced degree in automotive engineering from MIT, it was much easier to just ask Jamie to drive me places.

It worked out fine. I walked into salons or stores and he drove to the studio for a few hours while he waited for me. Then the unthinkable happened – he grew tired of taking me to my weekend appointments to get my hair cut or my nails done.

“Just take the car,” he’d sigh, tossing me the key while sprawled in a chair staring at the television.

“You don’t mind if I drive your car?”

“Why would I mind? You have a cleaner driving record than I do.”

“But my parallel parking isn’t so good.” That gave him pause. He was thinking about his fenders.

“Park in a garage. There is one directly across the street from Umberto’s.”

That is how I eventually learned to drive in LA. It was all right as long as I didn’t have to drive far or fast. Mostly I drove to Beverly Hills, since that was where my hair appointments were, and sometimes I drove to Culver City to pick up Jamie after work. In four years, I never touched a single button in the car except the seat adjuster. I listened to whatever music Jamie’s IPod played; I never opened the trunk; I never put the top up or down.

One August morning, Jamie asked me to drive him to work – he had appointments in the studio all day and didn’t need his car – and since he and I had tickets to a preview that night, I could get ready at my leisure, then fetch him, allowing us to head to Hollywood without his having to schlep back and forth from Culver to Santa Monica.   It was a beautiful, cool, sunny, morning and so early that there was almost no traffic on Lincoln or Washington. After clearing the main gate, Jamie parked perpendicular to the lawn behind the Mansion and kissed me goodbye. As he stepped out of the car and gestured for me to scootch into the driver’s seat, I suddenly panicked.

“Where is the key?” I asked frantically.

“There,” he answered, pointing into the little console well.

“Of course not. I know you have no idea how to do that. It amazes me, but I accept it. Although how you can be smart enough to earn a PhD in nineteenth century British literature and not know how to pump gas eludes me.”

“They are different skill sets,” I sniffed.

“Yeah. Okay. Look, just park in the driveway as close to the garage door as you can get but don’t pull in. Remember, don’t pull in. The garage is so small and the hood of the car is so long that I don’t think you will be able to see over it and you may hit the front wall.”

“You are fine when you’re driving; just be careful parking.”

He leaned in and kissed me goodbye again.

To this day I wonder how many Hail Marys he said as he watched me U-turn the car to exit on the other side of the guard’s booth.

I made it home without incident, and slid as far into the uphill driveway as I dared. Slamming the door and turning to look over my shoulder as I climbed the stairs to the walkstreet, I realized that the car wasn’t very near the door; sidewalking moms pushing baby strollers would have to veer around the back of the car, nearly into the street to get past. I wondered whether I should try to get closer. Nervous and deciding against it, I tapped in the gate code and entered the walkstreet.

After drinking more coffee, I packed my phone, a book, and a bottle of water, then spent most of the day reading on the beach, going home only when dirty-looking, grey, Nimbostratus clouds began to tumble over one another toward shore and the wind started whipping sand. Hoping the rain would hold off, I walked up the hill toward our house. Stopping to let a car pass on Third Street, I looked over and saw the car parked in the driveway; the top was down. Damn! I had no idea how to put it up. Well, maybe the rain would hold off until I reached the studio. Fingers crossed.

I entered the house, put out fresh food for Spencer, and decided to shower now. I would go to the studio early to meet Jamie; that way, I could get the car into the underground parking garage before the rain. He could finish work and I would read my book until he was ready. When we left for the premiere, he would put up the car’s top. I wouldn’t have to figure out which button to push.  Easy peasy lemon squeezy. “What a genius I am,” I thought, as I turned the knob for hot water in the upstairs shower.

An hour later I was ready to leave. As I turned to lock the heavy, oak, door, the wind caught the screen door and yanked it backward, breaking its hinges. My hair flew into my eyes as I tried to catch and secure it. “Wow,” I thought as I all but blew down the walkstreet, “this is really going to be some storm.” It wasn’t raining, yet, though, and I wondered how much longer it would hold off.   I hoped it would be for at least thirty minutes because that was how long it took to get to the studio at this time of day.

I backed out of the driveway and turned right at Mary Hotchkiss Park and right again onto Fourth Street to drive straight to Ocean Park Boulevard, where I would turn onto Lincoln. I knew only one way to get to the studio and it involved crowded main roads.

I made good progress for about four blocks, then all traffic stopped abruptly.   Shit. I needed to get to the studio. The wind was lashing my hair against my face; I glanced up into the darkening sky and wondered what were my chances for making it to Culver before the deluge.

I brushed my hand against my right cheek. It felt wet. Was that a raindrop? Praying that I was wrong, I peered upward from beneath my lashes. The sky looked sinister; roiling grey clouds billowed. The driver of the car behind me blared his horn to encourage me to fill the three-inch gap that had opened between me and the car in front. I lifted my foot from the brake and coasted.

I felt a splat on my left hand, resting lightly on the steering wheel. No, no, no, no, no. It wasn’t raining, was it? I gazed at the melancholy sky again, hoping that I would see the clouds thinning, as though the storm were passing over. No chance; actually, they were giant, ashen, tumbleweeds thickening across the whole visible expanse of sky. As another drop landed on my nose, I began to panic.  This was one of my worst driving nightmares. I was stuck in traffic and  I had no idea how to put up the top.

I pushed every button I saw on the dashboard. While the car flashed several lights and made a couple of weird, metallic noises, the roof never budged.

The drops came down with greater frequency as I inched along Lincoln, simultaneously trying to keep dry, observe the traffic flow, drive the car, and put up the top.

The rain began coming down in earnest. What had happened to the damned drought?  The passenger seat filled with water. My hair was plastered against my head in bedraggled clumps. My throat thickened and I sniffed with self-pity. Here I was stopped dead on a traffic-packed street at rush hour in the rain in a car I had no idea how to work. I hated Los Angeles.

I became aware of a horn tooting. “Hey, lady!” came a man’s voice to my right. “Put the top up! It’s raining!”

I burst into tears. “I don’t know how!” I shrieked. “It’s not my car! It’s my stupid husband’s stupid car and I almost never drive it!”

The man stared at me through the open window, then suddenly his car door opened and he hopped out. He leapt over the passenger door of Jamie’s car just like Douglas Fairbanks did in the movies and slid down into the squelchy seat. “Ooooh, yuck,” he said grimacing. “My pants are all wet. My wife is never gonna believe this.”

He reached all around the console pressing buttons and sliding switches.

“I tried all of those!” I wailed, wiping my nose on the back of my right hand.

A whirring sound began. “Not all of ‘em,” he said. Within seconds the roof had plopped onto the car. He pointed to a latch over my head. “Pull that open. Now push it shut. Snap it hard. There. You’re set.”

I stared at him in shock. We were no longer getting rained on. He grinned at me then opened the passenger door to exit. Just as he slid his legs out he said over his shoulder, “Hey, stop at a fast food place for some napkins and dry the car.   There are a few on Washington. Your husband will never know.” Slamming the door, he was gone.

He slid back into his own car. The traffic continued crawling along but he turned right and exited Lincoln in the next block. I never saw him again.

Eventually I made it to the corner of Lincoln and Washington, the scene of the four-car collision causing the jam.  The traffic didn’t seem so bad now that I wasn’t sitting in the rain, though.

I drove to the studio and entered at the Ince gate, but rather than head into the parking garage, I turned left and stopped the car in front of the commissary. I ran in and waved hello to Mario, who ran it, and as he watched, stuffed dozens of napkins into my gold Birkin.

“Uh, do you need help with something?” he asked.

“No, thanks,” I waved again and slid back into the car.

I drove down the ramp into Jamie’s space in the garage and proceeded to dry the interior. Certain that Jamie would never know, I dropped the large clump of wet towels into a garbage can and entered the elevator in the Mansion. I exited on the second floor and headed to the closest ladies’ room where I used the giant hand dryer to blow my clothes dry, then I scrunched my hair under it to make waves. Gazing in the lighted mirror, I wiped off the mascara panda circles from under my eyes and freshened my lipstick. I looked at my watch. Still early. Good.

I opened the door and climbed the stairs to Jamie’s office on the third floor. I would still have time to read a few chapters of my current novel.