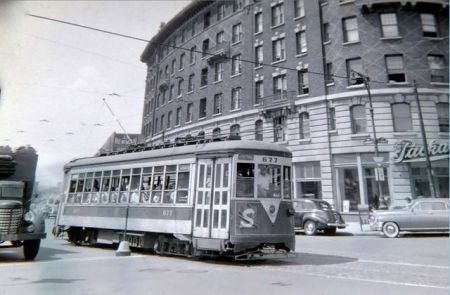 2474 Grand Avenue, Apartment 18 C, Bronx, NY 10468, halfway between Fordham Road and West 190th Street, was my family’s home from 1939 until the mid-1970’s. It’s where I lived after my mom brought me home from Fitch Sanitarium in October 1959. It and my grandparents’ business, an electronics sales and repair store called DeVoe Radio & Electric, on Fordham Road, are the places that I have always associated with my family history in New York. So it was a surprise when my dad phoned me one evening to tell me of a conversation he had had with an Unclaimed Property and Estates lawyer for the State of New York.

“Grandma owned a house in the Bronx,” he said.

I could almost hear him shrug through the telephone line. “I don’t know, exactly; somewhere near the intersection of 161 Street and Southern Boulevard.”

I thought. “Off Jerome Avenue?   Kind of near Yankee Stadium?”

“Kind of but I don’t really know.”

“If she owned a house, why did we live in the apartment? Did someone leave it to her and she was unaware that she owned it?”

My father paused before answering. “Maybe, but I can’t believe that would be true, not least because she would have told me. Certainly after Grandpa died, she absolutely would have told me for estate planning reasons if for no other.”

“Since when had she owned it? Maybe she didn’t know.” My grandmother had suffered a series of strokes and had been unaware of many things for quite a while.

“Apparently, it was left to her and her brother jointly in the 1940’s and, at some point, was lost for unpaid property taxes.”

That meant she had been aware of it since she hadn’t been ill until the early 1980’s. “How did you learn about this?” I asked.

My father relayed the story of the lawyer who had contacted a cousin, apparently using the telephone book: he had been the only potential heir the lawyer was able to find because the rest of us have different surnames or unlisted telephone numbers.   The cousin had advised the lawyer to speak with my father, the person with the longest memory for family history. My grandmother’s father, Jack Roth, had bequeathed a house and lot he had owned and utilized as a rental property to my grandmother and her brother, Benjamin. At the time of Roth’s death, my grandmother’s brother had long since died of tuberculosis, leaving her the sole beneficiary of the bequest.

“So you never lived in the house as a child?” I asked my father.

“No,” he replied. “I never even heard about it. We lived in an apartment on the Grand Concourse when Grandpa’s father lived with us when I was very young, then moved to Grand Avenue after he died because the Concourse apartment was too big for us.”

“And she never mentioned it?”

“Who lived in the house?”

“Some cousin’s on Jack Roth’s side of the family but Grandma and her brother didn’t know them because remember that her father left them when she was eight years old.”

“So how did he come to have the money to buy a house for other people to live in when he couldn’t even support his family?” I knew from my grandmother’s stories that her father disappeared from her life completely leaving neither a collar button nor a dime behind for his family.

“Oh, he started a trucking business at some point, years after Grandma’s mother divorced him for desertion, and did pretty well for himself,” my father answered.

“Hm. But not so well that he could look after his children,” I retorted.

“Apparently he started another family; he turned his back on Grandma and Uncle Benjamin along with his first wife. He never saw them again, never even sent a birthday card. That’s why it’s so odd that he left her the house.”

“Maybe, but I can’t figure it out. All I can get from the lawyer is that the house’s title was transferred to my mother and it was rescinded a few years later for unpaid property taxes.”

“The title went to the City of New York,” he answered. “And it owned it for a while then sold the property and that is the money that the State and City have determined belongs to Grandma.”

“How long ago did they sell it?” I asked.

He snorted. “Decades, which is what makes it so interesting that they are just looking for her now.”

“I don’t know. Apparently they are cleaning out old files and attempting to pay long-delayed money to the heirs.”

“A couple of hundred thousand dollars before taxes and fees,” he answered.

“I submit paperwork proving that Grandma was my and Uncle Carl’s mother and that her brother died leaving no heirs.”

“How do you prove that?”

“Well, I have my birth certificate so I have to obtain a copy of Uncle Ben’s birth and death certificates and presumably they will accept that since he died so young he left none.”

“Gee, that’s a lot of paper, but it’s still pretty cool. How long do they suppose this will all take?”

“Probably about a year, maybe a bit longer.”

“That’s something nice to look forward to,” I offered.

He sighed through the phone. “I won’t hold my breath. But what matters more than the money is that my mother kept something from me. Especially when we did their estate planning and . . .” His voice trailed off.

I didn’t know what to say that would comfort him. “Maybe she and Grandpa couldn’t afford the property taxes. Maybe she didn’t want the house. Maybe it was too little, too late from the man who left her.”

“Maybe.” He sounded unconvinced. I got the feeling that my father didn’t really want the money, either, whether because it came from a disreputable source or because it was tangible proof of a family secret, I don’t know.

About a year later, I asked him on the phone one night. ”Hey, did you get the money yet?”

“It took over three months to get the birth and death certificates for Grandma’s brother, Ben, and then when they realized that at the age of thirteen he may have been able to impregnate a girl, they began an entirely new heir search for his children.”

“He didn’t have any!” I exclaimed. “Grandma always said that she had no living relatives except Aunt Lillie on her mother’s side.”

“I now, but they don’t believe me,” my father replied.

“So where are you now in the process?”

“Waiting for the City and State of New York to agree that there are no other heirs.”

“Youch,” I answered. “Considering it took them decades to find you, this could go on forever.”

“In which case you had better begin getting all of the family paperwork in order because you may have to continue this after I die.” He sounded disgusted, although whether by the process, the delay, or his mother’s secret I still didn’t know.

About eighteen months after that conversation I was wandering through a department store with my mother. “Whatever happened with that money that Daddy is supposed to get from New York?” I asked. “Has he received it yet?”

“Hell, no,” she replied refolding a sweater she was considering buying. “We just heard from them last week that there are no heirs on Ben’s side, so now they are back to your father and your cousins.”

“So where are they in the process?”

“Why does that matter?”

“Apparently your uncle lied about his full, legal name and age in order to enlist and all of the paperwork doesn’t match up.”

I was baffled. “Why does it have to?” I asked. “He has been dead for years. Is it so his children get the money?”

“No, it’s because he died penniless and intestate and the VA paid for his funeral and now it wants to recoup its costs if he is set to inherit something posthumously.”

My mouth popped open and I stared at her. She shrugged and waved a hand. “I don’t want to think about it,” she said. “Let’s go get lunch.”

That was in July. A year later, I was helping my parents consolidate and destroy old files so they could dispose of an archaic, dented, metal filing cabinet. “Do you want this?” I would ask about each file folder I pulled from the damaged drawer. I pulled out a green hanging folder, about three inches thick, and stuffed with papers. “Do you want this?” I asked as I handed it to my father.

He looked and sighed. “Unfortunately yes. That’s the property file.”

“What property file?” I asked. “You sold the beach houses years ago. You don’t need that, anymore.”

“Not the beach property.” He responded. “It’s the Southern Boulevard property that belonged to your great grandfather.”

“Dear God! Are you and New York still playing around with that?” I exclaimed.

“New York is,” my father replied. “I am still trying to figure out why my mother owned property she didn’t pay taxes on and then never told me about.”

I didn’t know what to say. “Maybe she forgot about it,” I suggested lamely, looking into his blue eyes.

He refused to meet my gaze. “Maybe,” he repeated.

Last Christmas I saw the file on an end table in my parents’ living room, but didn’t say anything at first; that night, before leaving, I pointed to it while my father and I watched the eleven o’clock news. “Still?”

“Holy shit. This inheritance is Dickensian in its length. What are they waiting for now?”

“There has to be a hearing. All of the paperwork is presented and a judge agrees to release the funds to the heirs, however, he could decide to release it conditionally.”

“What kind of conditions?” I queried.

“He could put a ninety or one hundred-twenty day hold on the money so no one may touch it immediately or require the heirs to post a bond for the full amount.”

“What the hell for?” I exclaimed. “Surely they don’t think there are any other heirs at this point. And even if there were, they have been holding the money since before I was born; surely they have earned proceeds on it during that time. Those proceeds must be large enough to cover its loss.”

My father shrugged. “It doesn’t even matter; it’s found money and found money I don’t even really want.”

“But you could use it,” I pointed out.

“I could always use it since your mother and I are long retired,” he agreed, “ but I don’t like what it represents.”

“What does it represent? Some bastard’s payback after deserting his family,” I exclaimed.

“Yes, money that someone seemed to believe would make everything all right,” he answered.

“So what? He’s dead. And you’re not. Linda’s not. Cynthia’s not,” I replied, naming my cousins. “They might like to have the money.”

“Their mother didn’t lie to them!” he blurted.

“Your mother didn’t lie to you,” I answered after a moment. “She just didn’t tell you everything about her own, personal life.”

“Don’t you and Mommy have interior lives that you don’t share with me?” I asked. “It’s no different.”

He stared at me, then clicked the remote to make the news broadcast louder and turned away.

It is over a year and the money has not yet been released to the heirs. My parents are in their eighties so, if it is coming, it had better be soon; they could use it, they would enjoy it, and it is legally theirs. Besides, I don’t want my heirs to begin the process all over with another collection of certificates in thirty years’ time.