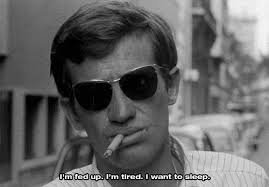 When I was an undergraduate I enrolled in an Introduction to Italian class.  It met from 8 – 10:30 am on Tuesdays and Thursdays.  Since I could hardly be considered a morning person, my mother fairly shrieked with laughter at the thought of my actually arriving there any time before 10, but there were no openings in any other sections and I was feeling Continental.  It had to be Italian, too – I mean, how could you not like a place that’s shaped like a high heeled boot?

The first day, I stumbled in, disheveled and grumpy, wondering just how badly I really wanted to do this, and saw that this whole becoming bilingual process was going to be better than I had imagined.  A lot better.

The instructor was already in the front of the room, leaning on the table that functioned as a desk, arms and legs crossed casually, elegantly.  He wore perfectly tailored khakis and an impeccable white linen button-down shirt.  This alone made me stare.  NYU in the early 1990’s was full of black-jeans-and-leather-jacket clad poseurs. Everyone looked like Lou Reed, including the girls.

I had no idea what he said but I was hooked. After that, I was never absent and smiled at him throughout the entire session.  He must have thought I swallowed Chiclets whole.

Every day he looked more or less the same, sharply pressed khakis, crisp white linen or cotton shirt.  Once a week or so, probably on department meeting days, he wore a silk tie.  They were always of casually elegant design, a foulard or small paisley.  I was dazzled.  After that first day, I went to class completely groomed, too.  I washed and blew dry my hair every morning.  I scoured places like Alice Underground for chic 60’s styles.  On a weekend visit home I even swiped my mother’s last bottle of Narcisse Noir.

Eventually, my own sartorial efforts paid dividends.  He smiled his crooked grin (I just knew a Gauloise should hang from the corner) and leaned over my shoulder smelling of something spicy whenever I asked for extra help.  He was always very encouraging to me, marveling at both the construct and subjects of my sentences.  (“Gradirei il rivestimento di Armani nella finestra, prego. Formato sei!”)

One day he asked me to join him for coffee after the class.  He had about an hour before he had to return to his office to grade papers.  I swooned.

I had hoped to converse in chic foreign tongues but since I didn’t actually speak anything but English, we talked like everybody else.  It didn’t matter.  I was enchanted.  We continued having coffee together nearly every day after class.  Sometimes we chatted about our backgrounds.   He was the only son of an Italian father and French mother and spoke 3 languages.  I never really said much, just listened to the timbre of his sonorous voice and slid into gossamer daydreams about walks around the Tower of Pisa in the moonlight.

One day I got to class a little late.  The lesson had already begun and since no seats remained up front, I chose one in the back row.  He looked up and smiled at me.  I smiled back.  I could see that it was a tie day, but the tie wasn’t one of his usual tasteful ones.  It was one of those garish, techno-colored Nicole Miller ties, the ones with fluorescent colored designs on a black ground.  The design was pink and white.  While I couldn’t make it out, I could tell it was awful.

I had no idea what was the subject of that day’s lesson.   Vorrei voglio something or other, I think.   I couldn’t pull my eyes from the fabric strip hanging from his neck. It looked like. . . I squinted . . .Barbie?   I stared and twisted my neck as discreetly as possible.  Barbie?  Barbie.

At the break midway through the class, I picked up my notebook (il taccuino) and tiptoed my way through the backpacks (i zaini) ostensibly to ask a question but really to get a closer look at that tie.  Praying I was wrong I approached.  It was Barbie, all right.  Her name was spelled out in big pink letters, randomly scattered with figures of the original ponytail Barbie and blonde bubble-haired Barbie and shoes, those little open toed mules that Barbie wore.

“No, I bought it.  I wear it the first Thursday of every month.”

“That’s the day of our meeting.”

“Yes.  I am the President of the Long Island Chapter of the Barbie Club.”

At the exact second that those words left his mouth, my infatuation ended with a sharp internal yowl, like a cat’s tail caught in a door.

Jean-Paul Belmondo would not wear a Barbie tie.  He would not join a Barbie club.  He would sneer at the thought as his Gauloise hung blithely from the corner of his mouth.

This story appeared in a slightly different form in What Was I Thinking: 58 Bad Boyfriend Stories; St. Martin’s Press; 2010